AAFP Motherboard Sockets: Are They Important? 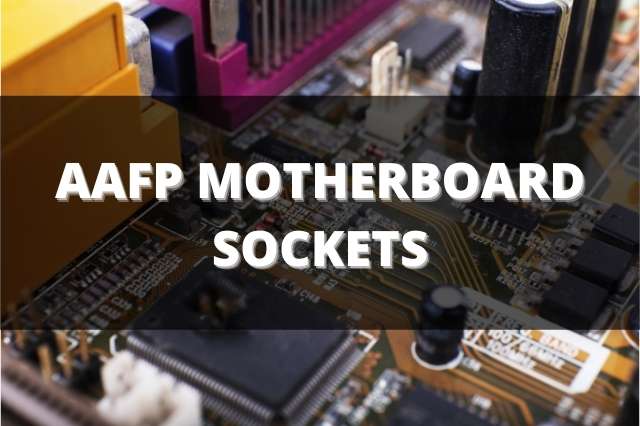 It’s common knowledge amongst seasoned users that rear I/O audio is usually superior to a front audio connector. That’s because the onboard DAC is directly connected to the audio jacks at the back of your motherboard. Whereas front audio is routed through a front audio header, sometimes called “AAFP”.

What is an AAFP Motherboard Socket?

AAFP stands for “Analog Audio Front Panel” and it refers to the 10-pin header on your motherboard that powers the front panel audio.

Most modern motherboards , cases and enthusiasts refer to this as “HD Audio”, but HD and AAFP are essentially the same thing.

The headphone and microphone audio ports (sometimes a single combo port) at the front of your PC case end in a single cable with a 10-pin connector, which then plugs into the AAFP header on your motherboard to enable the front panel audio.

Major Uses of AAFP on a Motherboard

An AAFP socket really only has one use and that’s to provide audio services to the front jacks and to receive mic input from any input devices connected at the front.

The modern HD Audio connector also does the same things, just with a different name. However, it wasn’t always like this. The standards that precede both HD Audio and AAFP were partially dissimilar.

Is an AAFP Socket Important?

Analog Audio Front Panel has been around for a long time. It is the direct successor to the AC’97 standard and is still prevalent to this day. This is due to the new HD Audio connector being built on its foundation.

HD Audio (also known as “HDA”) has succeeded AAFP but that’s not because HDA is better—they’re the same—it’s actually because AAFP is a less easy name.

Only recently did motherboard manufacturers stop referring to the header as AAFP and coined the HDA term. Essentially, HDA is AAFP.

Each AAFP header has a 10-pin layout, but one pin out of those is removed for keying. So, in reality, there are only 9 pins with one missing. Furthermore, the connector 10-Pin design is stacked. This means that five are on top and five on the bottom. Usually, the second pin from the right on the top row is the one missing.

Front panel audio has been a part of case designs since the early 90’s. The convenience that stems from having audio ports at the front of your computer is a big reason why AAFP is so prevalent.

Despite recurring issues with the panel panel audio and generally worse quality, the ease of access keeps it relevant.

Most people find it a hassle to plug equipment at the back of their PC, especially if their computer isn’t placed in an easily maneuverable location.

Plus, the sound difference between front and rear audio is quickly shrinking, as manufacturers improve isolation and shield the HD cables better.

Therefore, AAFP headers on your motherboard aren’t going anywhere anytime soon. The majority of people want to use front options for their sound components and would likely continue, even if they know about the potential benefits of switching to rear I/O audio.

Does Every Motherboard Have an AAFP Socket?

Nearly every motherboard in production today has AAFP sockets, but every manufacturer labels them differently. For instance, MSI calls it “JAUD1” while Gigabyte labels it as “F_AUDIO”. Only the ASUS site on their form factor selections still refers to it as AAFP.

Only specialty motherboards, such as those used in data centers and servers, omit AAFP headers. You’ll find AAFP headers on most older motherboards as well. Most of them should call it AAFP, but, once again, depending on your specific board, it can be called something else as well.

Connecting The Front Panel Audio Connector to the Motherboard

Nearly all computer cases come with a non-detachable cable that stems from the AAFP ports and ends in an 10-pin audio connector , that plugs into the AAFP header on your motherboard.

Connecting it to the AAFP header on the motherboard is straightforward.

And just like that, you’re done. AAFP is now connected to your motherboard carefully and securely. This should work like a charm inside Windows software.

How to Switch Between Front and Rear Audio?

If you have multiple devices occupying both front and rear audio then you can easily switch output devices from within Windows’ audio settings.

On the other hand, if you want audio output for both front panel and rear I/O audio simultaneously. If you have a modern system with Realtek’s Audio Console/Manager installed then it should be as easy as toggling a setting.

AC’97 (Audio Codec ‘97) is the predecessor to HD Audio modes. Like HDA, AC’97 was introduced by Intel as an audio standard for boards in 1997 until it was phased out in favor of AAFP.

Physically, the AC’97 and HDA (AAFP) are the exact same but the pinouts are slightly different. Intel even specifies that HDA is not backwards compatible with AC’97 so an AC’97 connector won’t work properly if plugged into an HDA header and vice-versa.

In fact, during the transition period from AC’97 to HD Audio, many cases would come with two connectors for front panel audio: one for AC’97 and one for HDA. You’d also have to select either AC’97 or HD from the motherboard’s BIOS and UEFI BIOS to make sure.

The Major Difference Between HD Audio and AC’97

The key difference between HDA and AC’97 is how they handle rear audio output. HDA has plugin detection, which means it can detect when something is plugged into the front ports and when they are empty.

With AC’97, AAFP was used to loop the audio output to the rear jacks. That means audio was outputted to the front ports first and sent back to the motherboard where it would then be output to rear audio. So, if you plugged in anything in the front audio ports, the rear audio would not work.

In contrast, HDA treats front and rear audio as two separate outputs for your system. Meaning each can work independently of the other.

So plugging in an output device in either front or the back of the motherboard will provide audio output regardless of any other factors, clearly making HDA the superior design over former connector options..

AC’97 and HD Audio are semi-compatible with each other as they existed in parallel before AC’97 was phased out.

Plugging in an AC’97 connector into an HDA header will interfere with plugin detection and cause issues with devices. It would fail to recognize connected devices properly and even show devices that are not present.

On the other hand, if you plug a HDA connector into an AC’97 header, it would disable the rear audio ports entirely and only front panel audio will work.

While it’s certain that HDA is better than AC’97 in every conceivable way, they’re both fairly good. Especially for everyday motherboard buyers, when it comes to actual sound quality and how well certain frequencies can be reproduced.

Front panel audio has come a long way since its inception and it only continues to get better. Modern premium motherboards come with such good built-in DACs that, for the first time, on-board audio is actually being considered studio quality.

It is astonishing that this is all built on the same AAFP header that has been around since the early 2000s!

Where Does the HD Audio Cable Go on a Motherboard?

The HD header is where you connect the Audio HD on your motherboard. Sometimes, this header may be called AAFP. Note, they are the same thing. Check your hard drives manual for a socket named AAFP or HD.

What Does HD Audio Do on a Motherboard?

HD audio is a standard that provides audio output and facilitates mic input through audio jacks located at the front of your computer case. DACs dictate the quality of the sound you’ll be able to hear from not only rear I/O but also front panel audio. The better the DAC, the better the sound fidelity.