How To Connect RGB Fans To Motherboard – 3 Ways 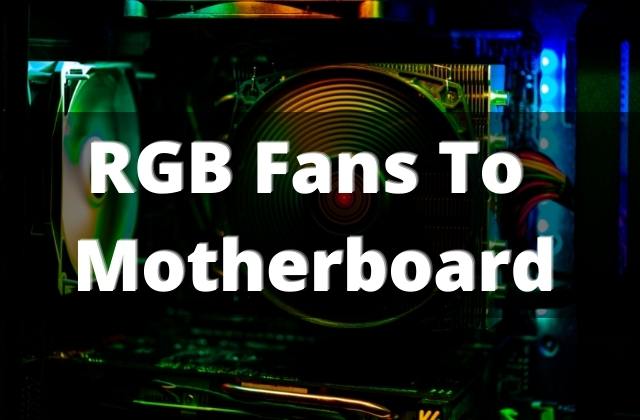 If you have bought some RGB fans for your gaming PC, then you will need to know how to connect RGB fans to motherboard in order to get them working.

The RGB lighting is now an integral part of modern gaming PCs, and rarely is there a PC built without a splash of lighting somewhere. As beautiful as it looks, it can be a real pain to set up and to get it synced up properly.

The lack of standardization in the RGB lighting segment is another problem that can confuse novice PC builders. Every manufacturer tries to ship their own controllers and it can be quite annoying to configure and set up RGB fans in a gaming PC.

In this guide, we will walk you through the process of properly connecting RGB fans to your motherboard, no matter what type of fans you have got.

How To Connect RGB Fans To motherboard?

Unsurprisingly, there are multiple RGB standards that are prevalent in RGB fans right now. Each different standard requires a separate motherboard header or has a different way of connecting the RGB device to the motherboard.

The RGB fans or devices with a 3-pin connector are known as aRGB devices or “Addressable RGB” devices.

This aRGB standard is a more advanced standard than the others and it is currently the most prevalent one as well. It has a lot more capabilities as compared to the 4-pin RGB standard.

In order to identify an aRGB fan, you have to look at its pinout. It uses 3 pins in a connector that is 4-pin wide, but the 3rd pin is absent.

This is a protection mechanism that makes it impossible to install this header in the wrong orientation.

Perhaps the biggest advantage of the aRGB fans is that they can display a lot more color combinations and effects than RGB fans.

This is possible due to the signal pin’s ability to talk directly to tiny controllers on the individual LEDs, therefore the color is not limited to combinations of red, green, and blue.

This means that aRGB fans and LED strips usually look a lot better than RGB fans and strips.

The 4-pin traditional RGB standard is a bit older than the aRGB 3-pin standard just mentioned. You can identify an RGB device by its connector, which will have 4 pin holes.

This makes it compatible with 12V RGB headers often present on older motherboards.

RGB fans are a bit less customizable than aRGB fans because their underlying mechanism is a bit different.

The 4 pins in an RGB motherboard are wired for the three primary colors (red, green, and blue), as well as a ground pin. This makes the configuration quite simple as the colors are carried by their individual pins.

Each color pin receives a certain amount of power to illuminate it, and the more power that a pin gets, the brighter will be the resulting color.

However, RGB fans have limited color combinations and the range of effects is less than what can be observed with aRGB fans.

In order to install an RGB fan, you will need to connect it to a 4-pin 12V RGB header on your motherboard. However, you cannot connect these fans to a 3-pin aRGB header since the 5V power is not enough for the lighting functions of RGB fans.

Nowadays, more and more manufacturers are including their own proprietary RGB controllers with their fans and RGB devices.

These controllers can also be used to connect RGB fans to motherboards without using the onboard 5V or 12V headers.

The great thing about controllers is that you don’t need your motherboard to have any RGB fan headers at all!

You can connect all your fans and RGB strips to the controller and then run it directly off SATA power without connecting it to the motherboard.

However, this limits the customization aspect of the RGB and you cannot control it through software in most cases.

Moreover, cable management is a real challenge when connecting multiple fans and a controller for RGB.

Here is the step-by-step process of connecting different types of RGB fans to your motherboard.

Follow these steps to connect 3-pin RGB (or aRGB) fans to your motherboard.

Your 3-pin RGB fans are successfully connected to the motherboard.

If you have 4-pin RGB fans, follow these steps to connect them to the motherboard.

Your 4-pin RGB fans are successfully connected to the motherboard.

So what to do if you don’t have any RGB or aRGB headers on your motherboard? There still is a way to install RGB fans in your PC. You will need a pack of RGB fans with a controller.

These controllers are usually included with fan packs, and they have a 4-pin dual connector as well as a power cable.

Follow these steps to install the fans and the controller in your system.

This way you can connect RGB fans to your motherboard without using the 3-pin or 4-pin headers.

Whether you want to go for the RGB ecosystem or newer aRGB devices is up in the air, but the RGB devices do have the advantage of value. They’re also safer because it’s impossible to accidentally damage them by plugging them into the wrong RGB header.

Although aRGB devices are a bit more expensive right now and a bit of a hassle to set up, they are superior in terms of lighting and efficiency. You can’t really go wrong with a pack of aRGB fans right now.

How To Use Molex Connectors For RGB Fans

The MOLEX connector is an ancient power supply connector at this point but it can still be useful in certain situations. One of these situations involves connecting fans to the power supply in the absence of a motherboard connection.

If your RGB fans do have a MOLEX connector, then you can simply plug those fan connectors into the MOLEX cables of your power supply to power your fans. Note that your fans will not have any PWM functionality when connected through MOLEX, and they will run at full speed at all times.

The MOLEX connector can also be used to power fan controllers instead of SATA power if your controller supports it.

What is the difference between RGB and LED fans?

The difference between RGB and LED fans is that LED fans only have one specific color, and they cannot change their colors through external commands. RGB fans on the other hand can display red, green, blue, and any combination of these three colors. RGB fans can be controlled using an RGB fan controller and software commands.

Can I plug 3-pin fans into a 4-pin RGB fan connector?

How do I know if my motherboard supports RGB fans?

Do RGB fans work with any controller?

RGB fans do not work with any controller. You will need a specific rgb controller which is included with the particular fan pack by the manufacturer. Different manufacturers use different standards for their controllers and compatibility isn’t guaranteed between them.