What Socket Type is Soldered to the Motherboard Along with the CPU? 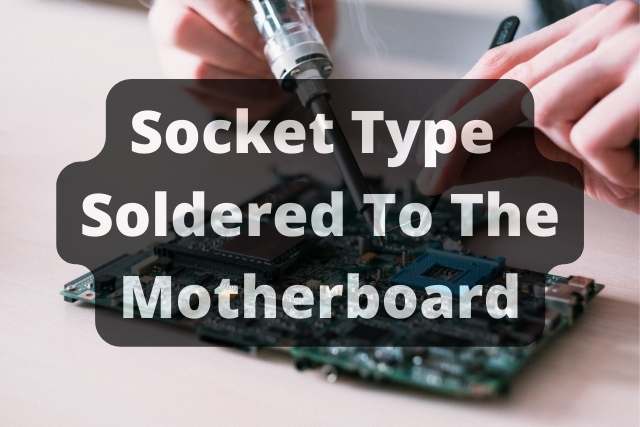 By definition, a CPU socket is something that allows you to drop in and take out a processor without the need for specialized equipment.

That’s why AMD and Intel’s processors are essentially hot-swappable. But there’s another, niche of CPU socket type out there, one that actually requires the CPU to be soldered to the motherboard.

So What socket type is soldered to the motherboard along with the cpu?

What Socket Type is Soldered to the Motherboard Along with the CPU?

This design takes away the convenience of easily replacing the processor as it gets permanently soldered to the socket.

BGA is also the least prevalent type of desktop CPU socket found today as others have gained popularity due to their higher flexibility.

Speaking of others, the following are some CPU socket types that are generally called better than BGA sockets in terms of flexibility:

What is a BGA Socket

All CPUs connect to their motherboard through some sort of contact point and usually, those come in the form of pins, either on the socket itself or on the CPU. In contrast to this, BGA does things differently as it has no pins at all; not in the socket, not on a single processor.

Instead, BGA CPUs have tiny balls at the bottom in place of pins (PGA) or contact pads (LGA). These solder balls are soldered to the BGA socket.

That means that a BGA CPU is a permanent motherboard feature and, thus, cannot be replaced or changed.

Technically speaking, BGA cannot even be considered a socket type since it uses a surface-mounted packaging design that has no protrusion at all and does not allow the CPU to be taken in and out.

It’s just a specialized pad/area on the motherboard that has insertions for small solder balls.

How to Find the CPU Socket of Your Motherboard?

It’s very easy to tell the socket type just by knowing what processor you have. If you’re unsure what CPU your computer is equipped with. You can easily view processor info in Windows by searching “CPU” in the Start menu.

Then, just look it up online and you’ll find plenty of info about chipset sockets, electrical signals, and all about your central processing unit’s operation.

Just by knowing if your (desktop) processor has pins on it, you can almost guarantee that it uses a Pin Grid Array Socket or PGA. Unlike Pin Grid Arrays, Land Grid Array Packages don’t have any pins. These are LGA sockets.

So which is best, LGA or PGA sockets?

Every Intel processor since 2004 has used an LGA socket to connect to the motherboard. Every AMD Ryzen processor uses PGA sockets including their older FX-series and A-series CPUs.

Moreover, nearly all laptops rely on a BGA socket package, though some older ones used LGA.

However, if you want to physically see for yourself then it’s also pretty straightforward to identify the socket type. Different CPU sockets means choosing between BGA, LGA and PGA sockets.

If your CPU socket has a square shape with several tiny holes inside, along with a smaller square in the middle containing some capacitors, then it’s a PGA.

If your CPU socket hs lots of shiny gold pins on the socket itself and the shape of the socket is a bit more rectangular, it’s an LGA socket. LGA sockets usually look more industrial than PGA, which usually has a more plasticky look to it.

What are PGA Sockets?

Pin Grid Array is a type of CPU socket that puts the contact pins on the central processing unit itself. In the picture below, you can see the bottom of an AMD Ryzen processor. Notice how there are shiny gold metal pins on the CPU.

Now, see the picture of its corresponding socket attached below. This is AMD’s Socket AM4. It’s based on a PGA socket. You can see that this socket has lots of tiny holes that look empty.

This is where each of those pins from the CPU inserts and connects to the motherboard.

PGA sockets don’t use any metal bracket, cover, or plate to hold the CPU in place.

Instead, most of them use the ZIF socket design which makes the frame of the socket move slightly in and out of place to secure and release the CPU tab from retention through the lever on the side.

Knowing your motherboard’s socket type can make all the difference with how your CPU talks to other computer system elements. The socket link is very important.

Land Grid Array has a few benefits over PGA socket options. For instance, the lack of sensitive pins on LGA CPUs makes the processor cheaper to produce.

Nevertheless the motherboard cost goes up due to the more complicated socket design of the entire system. PGA CPUs, on the other hand, allow for easier repairability and less probability for installation damage.

Even if you bent the pins on your PGA CPU, there’s a higher likelihood of them getting easily fixed than there’s a chance of LGA socket pins getting fixed.

You can even repair most PGA CPU pins yourself, but there’s no chance you’re fixing bent pins to create flat contacts on LGA sockets at home by yourself.

All phones today, including those from Apple, Samsung, Google, and more, use the BGA socket type, along with most laptop CPU options.

The reason for this is that entire pack for BGA is the only packaging implementation that can fit in such a tiny/thin space while providing all the necessary power and function needed.

There are further variants of BGA sockets as well. For instance, Plastic BGA and Ceramic PGA denote the socket’s material. The Micro BGA socket is another offspring that basically has smaller solder balls.

There are more complicated versions of BGA as well, such as Flip Chip Ball Grid Array (FCBGA) which is a “flip-chip” implementation of BGA that uses even smaller solder balls generally soldered directly to the motherboard.

CPU sockets come in all shapes and sizes and we covered every variation in this article. Now you know not only what socket your particular processor uses, but also the differences between major types of sockets.

Most CPUs can perform the same function for working or to play games, but there are several sockets to pick from.

Despite being starkly different from PGA and LGA, BGA sockets are still commonplace in many devices. It’s likely that the laptop you’re using right now is equipped with a BGA socket.

Apart from that, though, the days of BGA sockets being used for desktop computers are long gone. Now you know which socket type is soldered to the motherboard socket today!

What Type of Bus Does PCI Use?

PCI uses a parallel bus, as opposed to PCIe which uses a serial bus. This allows for data transfer over only a limited number of channels. The PCI serial bus can be either 32-bit or 64-bit.

What Type of Socket Does Not Require Any Force When Installing the Processor with the Socket?

ZIF, or Zero Insertion Force socket does not require any force when installing. Instead, a lever is used to lock the processor in place. No need for a third party tool or industrial soldering equipment to get the socket type soldered to the motherboard.

How Many Pins are in a Power Supply Connector That is Typically Used on Most Motherboards Today?

A 24 pin connector in a power supply is used on most motherboards these days. If you have a motherboard that follows the ATX standard, it will have a 24-pin connector on-board as well.