Should You Buy A Dual CPU Motherboard? 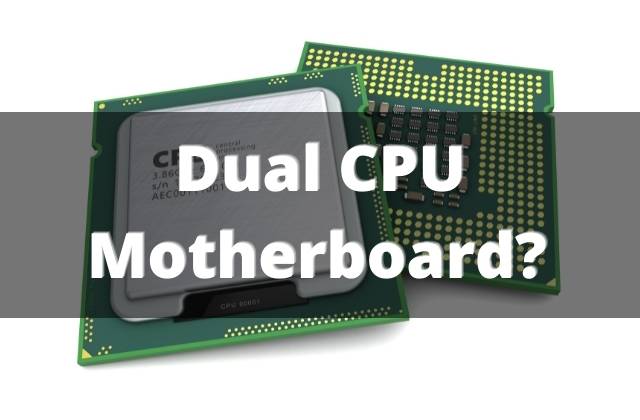 There are some motherboards out there that support not one, but TWO processors at once. So have you ever wondered if should you buy a dual CPU motherboard?

On paper, it seems like an ingenious idea. One CPU is good, so two must be better, right? Well, the answer is not quite as simple as that.

While dual CPU motherboards have a unique set of features that may be useful to a specific set of users, they also have several limitations that hinder their day-to-day functionality.

In this guide, we will walk you through the pros and cons of dual CPU motherboards and advise you on whether or not you should buy one.

Should you buy a dual CPU motherboard?

In today’s day and age, it does not make sense to buy a dual CPU motherboard because there are many more viable alternatives out there. Dual CPU motherboards were specifically designed for a particular use case, and they have long outlived their usefulness thanks to the rise of modern processor architectures. A normal consumer desktop CPU from Intel or AMD on a typical single-slot motherboard is a much better option for a regular PC user nowadays.

What is a Dual CPU motherboard?

By putting two processors on a single motherboard, you are effectively combining the power of both to a certain extent.

What is the purpose of a Dual CPU motherboard?

Essentially, dual CPU motherboards utilize a system known as “Parallel Processing” which means that they can utilize two physical CPUs side by side to improve the processing power of the system as a whole.

The software programs that can utilize parallel processing see a lot of benefit from this mechanism. Therefore, dual CPU motherboards are popular in areas such as research, video processing, machine learning, science, and so on.

Due to the combination of the two CPUs, the resulting system has lots of cores and threads. This is beneficial in the fields mentioned above.

In a dual CPU setup, both the processors share cache, buses, and memory which are synchronized together to split the workload between the two CPUs.

Advantages of a Dual CPU motherboard

So what exactly are the advantages of using two CPUs in a single motherboard? Wouldn’t it be better to use just a single CPU with lots of cores?

Technically, it is better to use a single core-heavy CPU nowadays for any consumer desktop PC, but dual CPU systems still have their place. There are some features that are exclusive to dual CPU systems that can be beneficial to certain fields.

The most obvious advantage of a dual CPU system is that you can combine the core count of the two CPUs. This can give you a huge advantage in terms of processing over a single CPU, and it can be beneficial in many core-heavy programs and applications.

Dual CPU systems also combine the thread count of the two CPUs, so you can improve the multithreading performance of your system as well.

However, modern CPUs such as the AMD Ryzen Threadripper and AMD EPYC series have tons of cores in a single CPU package, so the benefits of a dual CPU system in this regard have mostly become redundant.

Another really important feature of the dual CPU motherboards is that they offer lots of PCIe lanes for your storage and graphics devices. The additional PCIe lanes are of course attributed to the second CPU installed on the board.

With the additional PCIe lanes, these boards are better equipped for multi GPU support using SLI or CrossFire technologies (even though they are pretty much obsolete now). Moreover, you can also install more M.2 drives and more PCIe expansion cards thanks to lots of PCIe lanes.

This feature of the dual CPU motherboards is quite crucial in the server space.

Dual CPU motherboards that are designed for server use often support ECC (error checking and correction) memory. Often, they also have support for lots of RAM, which is quite beneficial for a powerful server or datacenter solution.

Servers demand ECC memory because they have to work 24/7 without any breaks, so they have no tolerance for errors in the memory. The higher max memory capacity is great for rendering farms and servers that are deployed for complex machine learning processes.

You also get loads of SATA and M.2 ports on dual CPU motherboards, thanks to the additional storage bandwidth of the second CPU. This can be important for people who want to install multiple storage drives on a single system.

These dual CPU motherboards can also be used in storage servers with loads of hard drives or SATA SSDs connected in a RAID system.

Can I game on a Dual CPU motherboard?

Well, technically you CAN game on a dual CPU motherboard. Games definitely work on these systems but the results may not be what you expect.

Due to the lack of compatibility and optimization for dual CPU systems, games do not really work that well on these machines. Video games are not developed to utilize those extra cores or the mechanism of parallel processing.

Moreover, gaming really does not have any use for the extra PCIe lanes or SATA ports. You may argue that an SLI or CrossFire implementation will directly help gaming performance, but those use cases have become obsolete in today’s day and age.

In most games, your second CPU may not even be utilized. In fact, many games might not even recognize the presence of a second CPU. You may also get issues such as FPS loss, stuttering, jittering, etc. due to the lack of optimization.

If you have a dual processor motherboard as a server and you want to game on it just for testing purposes, disable the second CPU to improve your gaming performance.

Unlike gaming, you can definitely expect a boost in productivity performance with a second CPU. However, it all depends on your workflow and what programs you regularly rely on.

In many popular video editing software programs, dual CPU systems are supported and you get the benefits of the high combined core counts. However, it might not make sense to build a particular video editing system using a dual CPU motherboard in the modern day.

You can pick up high core-count AMD Ryzen 9 processors like the Ryzen 9 3950X and 5950X that offer more than enough performance for most regular desktop users in terms of productivity.

Other high-end options include the AMD Threadripper processors which are really expensive but offer exponentially higher core counts.

Our Editor’s Choice is the ASUS WS C621E Dual Motherboard which has two LGA 2066 sockets on the Intel C621 chipset.

There are 12x DDR4 DIMM slots and 7x PCIe 3.0 expansion slots with full 16 lanes for Intel CPUs. It also has dual gigabit ethernet for networking.

If you are looking for the best budget dual CPU motherboard on the Intel platform, we recommend the ZXCVBNM X99 motherboard with the LGA 2011-v3 socket.

It is an affordable motherboard that still packs a mighty punch thanks to its 9 SATA ports and 8x DIMM slots.

Our pick for the best premium dual CPU motherboard on the Intel platform is the Supermicro X11DPI-NT which features the LGA 3647 socket.

It has 14 SATA ports and 16 DIMM slots for the ultimate power user, as well as support for 10 Gigabit ethernet.

For AMD, our Editor’s Choice is the Supermicro H11DSI-O with the AMD SP3 socket.

Our pick for the best premium dual CPU motherboard on the AMD platform is the Gigabyte MZ72-HB2 which supports both EPYC 7002 and 7003 CPUs.

It has 10 Gigabit networking and loads of server-grade features.

If you’re on a bit of a tight budget, consider the Gigabyte MZ71-CE1 instead.

It cuts a few corners here and there, but still supports EPYC 7002 and 7003 CPUs at a relatively lower cost.

For AMD, it is the best dual CPU motherboard on a budget.

You won’t go wrong with any of these choices if you plan to build a dual CPU system.

Even though there are certain advantages to a dual CPU system, there are several disadvantages as well. Here are some of the reasons why you should avoid buying a dual CPU motherboard.

It is wise, therefore, to stay away from dual CPU systems unless you know exactly what you need that system for. They are still viable in some specific scenarios in the server or workstation applications, but other than that there are better options available out there.

Are there any modern Dual CPU motherboards?

Can Dual CPU motherboards be used in servers?

Dual CPU motherboards can be used in servers and they perform quite well in that ecosystem. This is due to the extended compatibility and optimization that is offered by server applications to the dual CPU systems. Servers can utilize dual CPU systems to their maximum thanks to better support for parallel processing, the need for high core counts, lots of PCIe lanes, and many SATA ports.

Dual CPU motherboards need processors with the exact same model, the same number of physical and logical cores, the same TDP, and the same RAM speed. Basically, it is best to install two completely identical processors in order to avoid any compatibility or stability problems down the line. It is considered best practice not to mix and match processors.

Can I install one CPU in a dual processor motherboard?

You can definitely install one CPU in a dual processor motherboard as they are designed to support this functionality. However, depending on the motherboard, some features may be disabled as they are shared between the two CPUs. You may find that only half the PCIe slots will be enabled, or that some M.2 ports do not work. You can also install two CPUs on the board and disable one CPU from the BIOS if you so require.