How To Test A Motherboard 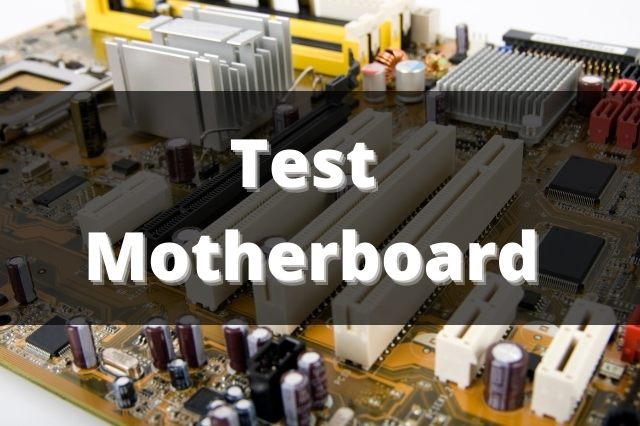 If you have bought a brand new motherboard for your PC, you may be wondering how to test a motherboard to check if everything is working. Motherboard testing is not relatively straightforward and it can get quite complicated if you really dive into things.

Of course, the motherboard acts as the platform of your PC and everything connects to it, so it is vital to have a faultless motherboard for your PC.

It is important to test your motherboard if you are facing issues in your experience, such as random blue screens and crashes.

How To Test a Motherboard

You can follow these steps to test your motherboard:

Once the display is visible, you will be taken to the BIOS. This marks a successful motherboard POST. Now you can unplug everything and install the board into your case.

However, you may also want to perform additional tests on your board as outlined below.

Steps to Test a Motherboard

Of course, issues can arise down the line as well which may not be detected by the initial POST test. If you are diagnosing a problem with your motherboard, there are several steps to follow.

In order of increasing complexity, the following are some of the key steps in testing a motherboard.

First of all, you have to perform a visual hardware check of your motherboard. Remove all the computer components from the board and lay it on a flat, non-conductive surface. Make sure the area is well-lit so you can see tiny imperfections.

Carefully examine the surface of the PCB. The most important thing to look for is any sign of burning or shorting. Black burn marks are fairly easy to spot on a PCB that isn’t covered with heat spreaders.

Also, closely examine all the VRM components such as the MOSFETs and capacitors. You do not want to see any swollen or bent capacitors.

Similarly, any burn marks or dried-up liquid marks near the FETs or capacitors are a bad sign.

Finally, you can also check for bent components such as pins and connectors. Exposed pins on the motherboard can be bent while installing essential components, and these may cause minor problems.

If you do find any of the above signs on your motherboard, there is a good chance you will have to RMA your board. It is not convenient or advisable to try to fix electrical components on the motherboard by yourself.

The power supply unit is a critical component of the PC that is often neglected while performing diagnostics.

If your PC is crashing or freezing under load, or even refusing to boot up, then the fault may lie with the PSU more than the motherboard.

It is important to perform a physical examination of the PSU wires by the naked eye. Look for frayed or damaged wires in the 24-pin and 8-pin ATX cables specifically.

You can also hook up the PSU with another system to check if it performs correctly.

You should identify the root cause of the problem before performing other tests on the motherboard since both PSU and motherboard fails show similar symptoms.

Each motherboard has an array of diagnostic lights on the PCB that can help you pinpoint the general cause of the problem.

Most modern boards in the premium price category have diagnostic codes as well that show a double-digit error code for each specific error.

There are four diagnostic lights on the PCB, usually found on the right edge of the board just to the side of the DIMM slots. You may also hear some beeping sounds when these led lights are active.

Each light is dedicated to a specific error category.

Although these beep codes are quite generalized, they can help guide you in the right direction when diagnosing your problem.

Premium motherboards may have a small diagnostic screen that displays a double-digit error code. You can then match up this error code with the guide found in the motherboard’s manual to see the exact description of the error.

This method is a lot more accurate than the aforementioned diagnostic lights.

Almost all motherboard manufacturers have some sort of a diagnostic tool baked into their UEFI/BIOS. However, you may not be able to access the BIOS if your motherboard has a critical problem.

There is a workaround to this problem, however. You can use a compatible UEFI program, which can be installed on a bootable USB drive.

This can be used for testing motherboard issues, as well as issues with other components such as RAM and CPU.

Once you get into the BIOS, run a diagnostic scan of the system and wait for it to complete. Sometimes the problem is as simple as an outdated BIOS version.

Test the Motherboard with Multimeter

If you are out of other options such as RMA and have exhausted all other steps, then you may want to test the motherboard using a multimeter.

This nifty little tool can be purchased at your local hardware store and it can be helpful in diagnosing the problem with your motherboard.

First of all, you will want to detect the presence of a short circuit in your motherboard. This can be done using the following steps with the help of the multimeter.

You can also check DC voltages using the multimeter. The following steps can help you in this process.

Although a simple tool such as a multimeter is ideal for diagnosing the problems on your own, you should not try fixing a motherboard by yourself.

The best route is to return the motherboard to the manufacturer and file an RMA claim.

Signs of a faulty motherboard

There are several signs and symptoms that you may encounter if your motherboard is having problems.

Of course, a completely dead motherboard will not even allow you to boot up. However, that is not the case with all damaged motherboards.

Some boards only show problems when they are put under load. Therefore, it is important to pay attention to the following signs to see if your motherboard is faulty or damaged.

When you first unbox the motherboard, it is important to give it a thorough examination as mentioned before.

Finding any signs of physical damage, burns, bent pins, bulging or damaged capacitors, etc. is a surefire way of knowing that the motherboard is faulty and should be returned to the manufacturer.

If you encounter a burning odor upon first boot, or even during normal operation, then it can be due to a short circuit or a damaged electrical component in the motherboard.

This sign is often the first thing you can detect when you boot up a faulty motherboard for the first time.

A faulty or damaged motherboard will most likely fail to POST. This is quite a simple way to know if something is wrong with your board.

If it does try to boot up, pay close attention to the diagnostic lights or codes that it may show during the POST process.

It is important to rule out other causes of POST failure such as DRAM problems or undetected GPU, which can also cause the system to fail this process.

The BSOD or Blue Screen errors in Windows are quite common and they can be due to a number of reasons. Mostly, they can be attributed to bad drivers or corrupted files.

However, if you are getting frequent BSOD episodes without an apparent reason, then there may be some link to a faulty motherboard.

The best thing to do in this case is to eliminate all other software and hardware factors until you can pinpoint the problem to the motherboard.

Normally, you have to press a certain key to enter the BIOS during a boot sequence. However, a faulty motherboard or a misconfigured motherboard setting can actually force you to the BIOS every time you boot up your PC.

This indicates that there is a problem in the motherboard that is preventing the system from executing the proper boot sequence.

Although these can be attributed to a host of reasons, you can’t rule out the motherboard if you are encountering locks and freezes on a regular basis.

If your system locks up completely (hard lock) and you have to unplug the main power to shut it down, then there is a high chance the motherboard may be at fault for that hiccup.

There may also be random crashes and reboots when the system is put under load.

Can a motherboard be repaired?

A motherboard can be repaired, however, it is not something that is recommended to be done by users. Damaged or faulty motherboards should be returned to the manufacturer or to a trained professional.

How to test motherboard without a CPU?

You can test a motherboard without a CPU by plugging in the power cables and connecting the peripheral devices like fans and RGB lights. If the devices work correctly, then the motherboard is certainly not DOA.

What causes motherboards to fail?

Motherboards can fail due to a number of reasons that include overheating, short circuits, physical damage, power surges, unstable voltages, or manufacturing defects.

How can I tell if my motherboard is faulty?

If your motherboard is faulty, it will show several signs of failure that include physical damage, burning odor, regular crashes and freezes, Blue Screen (BSOD), malfunctioning devices, and BIOS menu appearing at startup.