When Populating a Motherboard With DIMM Modules What Configuration Option Will Not Work? 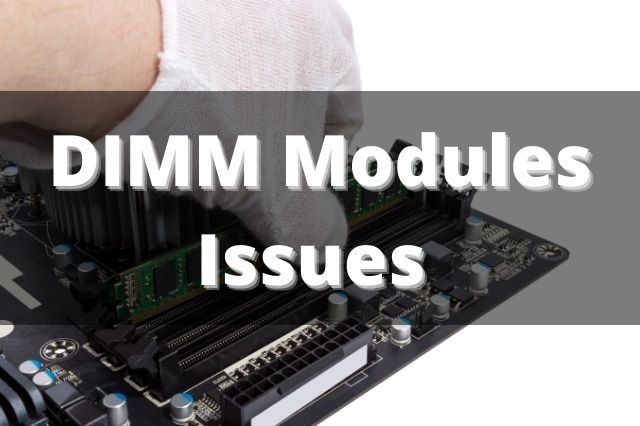 Installing memory modules into a motherboard is generally a straightforward task unless you decide to mix and match memory sticks. Usually, users tend to use the same brand memory modules with the same frequency and latency but that may not always be the case.

If you are trying to populate a motherboard with DIMM modules, there are some configuration options that may not work. This issue generally arises when users try to mix desktop memory modules with server-grade ones.

What configuration option will not work when populating a motherboard with DIMM modules?

There are several other configurations that may cause instability or incompatibility when you install memory modules.

The RAM frequency is the primary factor that needs to be matched across all the modules. Mismatched memory frequencies (or latencies) may cause failure to POST or instability in operation.

Three types of memory modules are commonly known in the PC space.

In this type of memory module, the memory is directly connected to the chipset controller without the use of a buffer. This kind of memory is mostly used in desktops and laptops.

In these modules, a buffer is used to help the system control a large amount of memory.

These modules do not have a buffer system. However, they contain a register that delays all the information transferred to the module by one clock cycle, thus increasing reliability. These modules are mostly used in servers and data centers.

Factors To Consider When Buying RAM

The following factors are to be considered when installing memory into your motherboard. These factors dictate the compatibility as well as the performance of the memory.

Modern motherboards are a bit flexible in terms of memory speed compatibility, but they are still not perfect. You will need to install the memory that is supported by the motherboard and the CPU in terms of frequency.

In the case of multiple memory DIMMs, it is ideal to have all of them running at the same speeds.

If you mix and match memory modules of different frequencies, the system will default to the lowest common denominator (slowest speed) and that can cause instability issues.

The aforementioned principle of uniformity also applies to memory latency or CAS Latency, which is even more sensitive than the frequency in most cases.

Can you mix different RAM frequencies?

You can mix RAM modules with different frequencies, but it is not always guaranteed to be successful. The system will try to run at the speed of the slowest RAM module, and that may turn out to be problematic.

This can cause stability issues and may prevent your system from POSTing.

Can you mix RAM modules with different sizes?

You can mix RAM modules with different sizes, as long as the frequency, latency, and brand of the modules match. This generally causes no noticeable issues.

Can I install DDR3 RAM on a DDR4 motherboard?

It is not possible to install DDR3 RAM on a DDR4 motherboard, or vice versa since the two memory standards are physically incompatible. This is also the case with DDR4 and DDR5 memory.