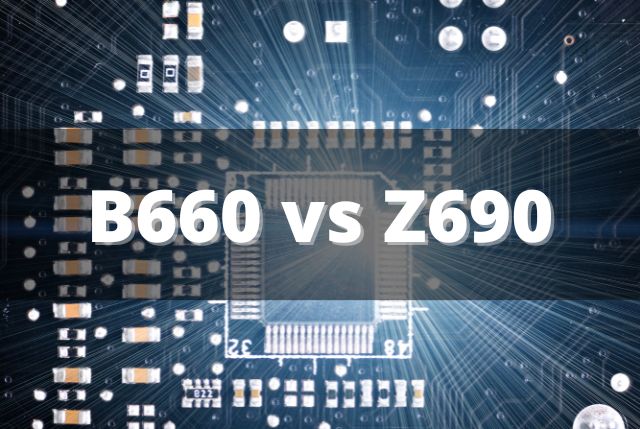 With the launch of the 12th Generation Intel processors, we also got a whole new lineup of motherboards that supported the brand new lineup of processors. Among the new motherboard chipsets, the Z690 and B660 platforms were some of the more popular options among consumers.

But what exactly is the difference between a Z690 and a B660 motherboard? Does the question of B660 vs Z690 really matter when it comes to gaming performance? Is it worth saving some money by going with the cheaper motherboard?

We will answer all those questions in this guide. First, let’s start off by listing the key differences between the Z690 and B660 chipsets.

What is a Chipset?

Every generation of CPUs is supported by at least one chipset, with recent generations getting support from three to five chipset models at the same time. A chipset is also sometimes referred to as a “platform” since it decides all the features that are present on the associated motherboards.

Regarding the Intel 12th Generation CPUs, you can think of the Z690 and B660 chipsets as the premium and mid-range platforms for these CPUs. Intel follows a strict naming scheme for their chipsets, with the Z-series being the top-tier chipset in every generation.

The Z-series is always followed by motherboards from other platforms, such as H-series, and B-series.

The Z690 platform is the flagship chipset for the Intel 12th Generation processors, codenamed Alder Lake. The Z-series chipset has always been the best in Intel’s lineup, followed by others such as the H-series and B-series motherboard.

B660 motherboards are a bit more budget-oriented, and they cut down a lot of the features that are found in Z690 motherboards. However, you can still use any 12th Generation Intel CPU with any B660 motherboard at stock settings perfectly fine.

The Z690 and B660 chipsets support the LGA 1700 socket, and currently, they support the same CPUs:

Here are some of the key differences between Z690 and B660 motherboards.

First and foremost, the biggest difference between Z690 and B660 (or all other chipsets for that matter) is that Z690 is the only chipset to support CPU overclocking. We have seen a similar case in previous generations as well, and Intel is sticking with its routine as only the Z-series platform supports CPU overclocking.

This means that if you buy an unlocked CPU such as the Core i9 12900K or Core i7 12700K, then you absolutely have to buy a Z-series motherboard in order to take advantage of the overclocking capability. You cannot overclock any processor on the B660 motherboards.

AMD is a bit more flexible with overclocking support on their budget chipsets such as B550 and B450, but Intel has always been pretty strict in this regard.

While Intel once made the ridiculous decision of restricting memory overclocking on their budget chipsets, thankfully that change has now been reversed. This means that both Z690 and B660 chipsets support overclocking your RAM memory.

For the Intel 500-series motherboards, you did not have any support for memory overclocking unless you bought a Z590 motherboard. Intel received backlash for this decision, which now they have reversed with the 600-series chipsets.

Both Z690 and B660 chipsets (along with others) have support for memory overclocking. This includes both the X.M.P profiles, as well as manual overclocks that enthusiasts may perform themselves.

On a more technical level, there is also a significant difference in the number and distribution of PCI Express lanes between Z690 and B660.

Furthermore, Z690 motherboards also support PCIe 5.0 in either 1×16 or 2×8 lane configuration, while B660 motherboards only support a single x16 lane.

All these numbers can be a bit confusing, and may also seem insignificant. However, the number and speed of PCIe lanes matter a lot in modern motherboards that have loads of high-speed devices such as graphics cards and M.2 NVMe SSDs.

Speaking of SSDs, the difference in PCIe lane configuration has a direct impact on the storage features that can be offered by Z690 and B660 motherboards.

As a result, not only can you can install more M.2 NVMe SSDs on a Z690 motherboard, but you can also have them operating at a higher speed due to PCIe 4.0 support.

Z690 motherboards are also more suited for high-speed SSD AICs (add-in cards) that take advantage of the full-sized PCIe x16 slots rather than the M.2 slots for storage.

Another significant difference between Z690 and B660 motherboards can be seen in the rear I/O of the boards. More specifically, the number and type of USB ports that are found on the Z690 motherboards are far superior to what you can find on a B660 motherboard.

The maximum number of USB ports that can be wired up in a Z690 motherboard is 14, while that number drops to 12 in a B660 motherboard. Obviously, you don’t get that many ports in either motherboard due to several factors, but the superiority still lies with Z690.

The last major difference between the Z690 and B660 chipsets is a pretty obvious one. Since Z690 is the flagship chipset with all the bells and whistles, it tends to cost a lot more than the mid-range B660 chipset.

Motherboards on the Z690 chipset can easily cost upwards of $300-400 on average, with the top-tier ones even coming in at $600 or above. Moreover, they are quite rare and can sell out pretty quickly.

On the other hand, motherboards on the B660 chipset can be found at much cheaper price points. You can even find some deals for boards as low as $150 if you’re lucky, but most of them still come around the $200 range.

In any case, the price-to-performance ratio is the better metric to look out for, and it is not just about the cheapest price tag. Some Z690 motherboards can provide better value for your money than B660 motherboards and vice versa.

Here are some of the very best Z690 motherboards that you should consider for your next build.

For the value hunters out there, we recommend the MSI Pro Z690-A WiFi. This motherboard offers an incredibly high value for your money and should be a default pairing for budget 12th Gen CPUs.

Its VRM design is good enough for stock operation on even the most demanding Core i9 CPUs. Therefore, for budget PC builders on the 12th Gen Intel platform, it does not get much better than the MSI Z690-A WiFi.

It gets the job done without cutting too many corners, even though it is quite basic in nature.

If you’re after a more mid-range option, then consider the ASUS TUF Gaming Z690-PLUS motherboard.

The TUF Gaming Z690-PLUS WiFi falls in the mid-range price bracket, but it packs a lot of cool features and has a decent power delivery system.

In essence, there is not a lot to complain about with the TUF Gaming Z690-PLUS, especially for the price. Pair this board with a mid-range 12th Gen CPU and you’re off to the races.

Our recommendation for the best premium Z690 motherboard is the Gigabyte Z690 AORUS Master. The “Master” is one of the more expensive variants in Gigabyte’s lineup, but we consider it worth the price.

The Z690 AORUS Master does not compromise in any aspect, and it is for those users who want the best for their PCs. You can also consider other options listed in our roundup of the best motherboards for i9 12900K.

Due to its supreme feature set, we consider the Gigabyte Z690 AORUS Master to be the best premium Z690 motherboard currently available for sale. Its extraordinary power delivery system and unique features make it too hard to pass on.

The Best B660 Motherboards

Following are our recommendations for some of the best B660 motherboards currently available for sale.

Our budget pick is the ASRock B660M Steel Legend, which is a very competent motherboard for the value hunters out there. This motherboard is ideally paired with the budget-oriented CPUs from Intel’s 12th Generation lineup.

This is also a great pick for compact PC builders who want to save space on their desks by building a smaller, micro ATX PC.

It is tough to beat the ASRock B660M Steel Legend for value when it comes to B660 motherboards. Sure, it cuts a few corners here and there, but the overall package is surely worth consideration if you are on a tight budget.

For our mid-range pick, we went with the ASUS ROG Strix B660-A Gaming motherboard, which falls in the middle of the pack when it comes to the ROG product stack. We chose the DDR4 variant of this motherboard to round off our selection of B660 options.

The price tag is decent, and the board also offers a unique design that is rare to see in budget motherboards.

Conclusively, for mid-range gaming build on the Intel 12th Gen platform, the ASUS ROG Strix B660-A Gaming makes perfect sense. It is not the best or the brightest in its class, but it certainly gets the job done without cutting too many corners.

Since B660 is a more value-oriented chipset, our pick for the best premium B660 motherboard is the MSI MAG B660 Tomahawk WiFi. This motherboard offers incredible value and is one of the most reasonable motherboards on the B660 platform in terms of price.

The Tomahawk series is known for its robust power delivery, and that trend can be seen on this board as well. You also get loads of high-end features on this mid-range board.

In essence, you cannot go wrong with the MSI MAG B660 Tomahawk WiFi if you want a premium motherboard on the B660 chipset. The blend of high-end features and a robust power delivery system is rare to see on a motherboard that is built on a budget chipset.

Z690 will support Intel 13th Generation CPUs. Intel has confirmed that the 13th Generation Raptor Lake CPUs will use the same LGA 1700 socket, so they will automatically be compatible physically. While Intel will release 700-series Intel chipsets for the 13th Gen CPUs, they have confirmed support for those CPUs on the 600-series motherboards as well.

Should I buy a B660 motherboard?